For my next crafting project, I made pillow cases which have fabric pattern on one side and crochet on the other side. I learned how to knit before crochet, but I always thought that crochet was very pretty.  I started making simple scarfs and small bags with crochet.  For the crocheted side, I matched a white yarn with pink, blue, or yellow yarn.  I made 25 motifs and stitched them together.  For the  fabric side, I picked a patterned fabric that matched the crochet color.  I also attached a zipper so that I can remove and wash the pillow case.

On the weekend, I occasionally go to Pike Place Market by the waterfront in Downtown Seattle.  I sometimes buy flowers, fruits, or vegetables, but I usually just buy a snack and enjoy a stroll around the market to look for something interesting.  I love seeing all the vendors selling seafood, flowers, pastries, and arts & crafts.  I love seeing the street performers.  The market is full of a festive energy that mingles between the sellers, local shoppers, and tourists.

The trip today began with a visit to see the Christmas trees being sold. 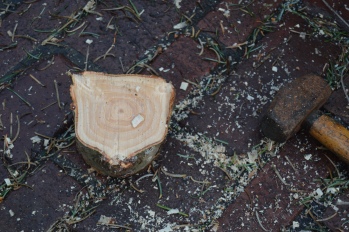 There are so many wonderful foods sold in the market, but my favorites are the pot stickers and BBQ pork buns from a Chinese bakery, the croissants or lemon bars from a French style bakery, and the tamales from a Mexican deli. 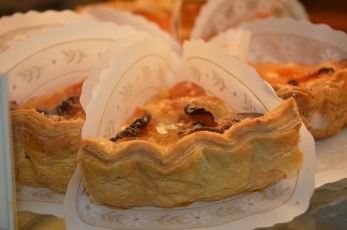 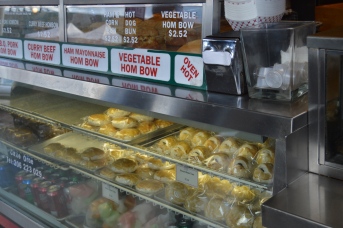 As we were walking around the market, we noticed a little friend bustling around on his little legs with just as much purpose as everybody else. 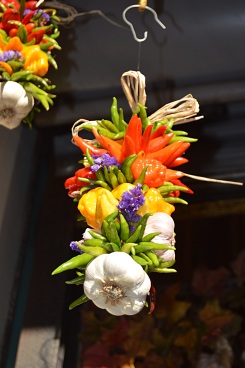 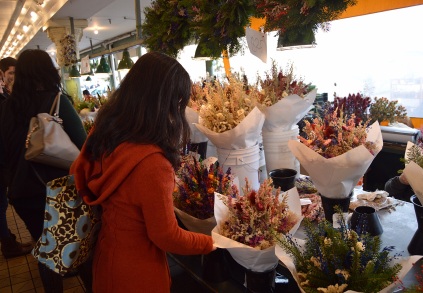 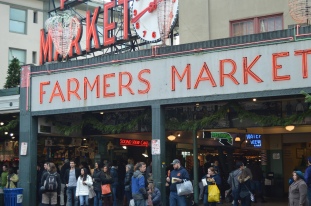 After milling around the market, we headed to café to enjoy a cup of coffee and the croissants accompanied with apricot and raspberry jam.  It was a lovely Saturday afternoon. 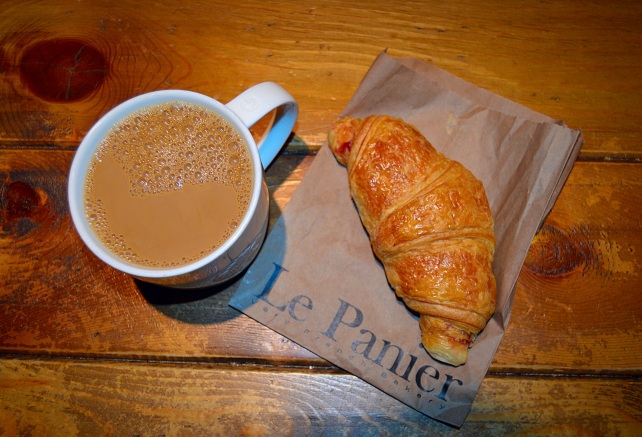 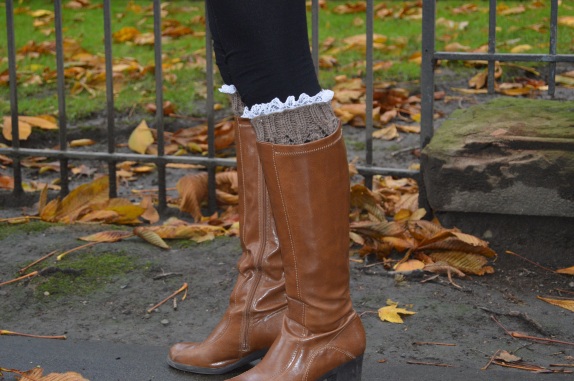 Living in a city, I walk everywhere; to the Sunday Market, the café, the library, the park.  It is fun to simply walk around the city in search of a new shop or to go on a picnic with Cocoa and Haru in spring and summertime.  It is, of course, not as much as fun in the very cold winter.  Although we don’t have much snow, it is very wet and windy.  Therefore, I love wearing boots in the wintertime because they keep me warm and dry.  To dress up a simple pair of boots, I knitted leg warmers (brown with white lace & white with pink lace and white pon-pon) to match my boots.  This is one of my small tricks to make the cold wintertime a little more enjoyable. 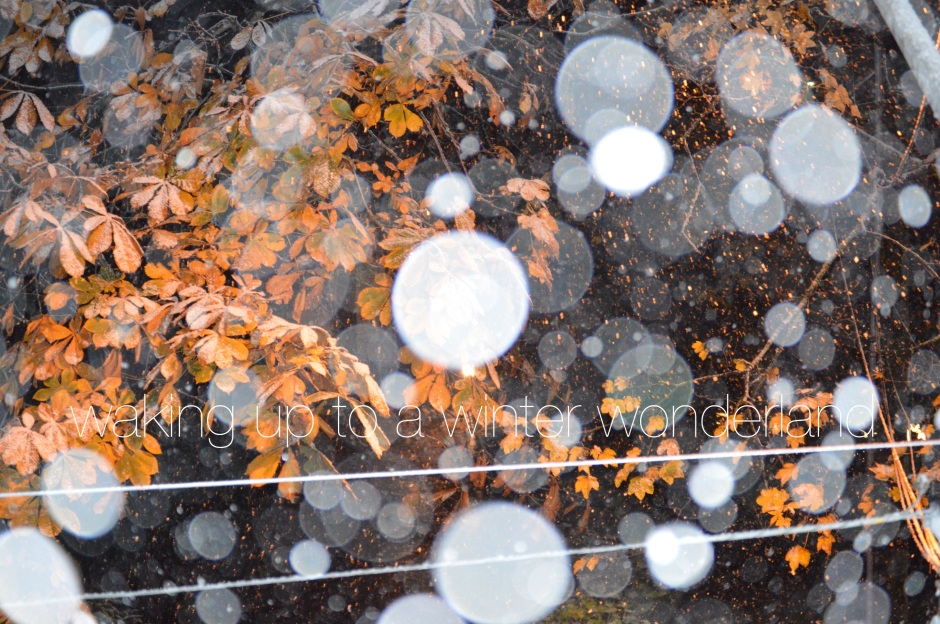 written by Sakura, (my daughter)

The winter is one of the coldest, dreariest times of the year, but what makes up for it all is the snow. It doesn’t snow here much, but when it does, the whole neighborhood is transformed into a beautiful, peaceful wonderland. I woke up to see snow falling outside my window, and it instantly felt like I was waking up on Christmas morning.

Pulling on stockings and layer upon layers of clothing, a walk out into my quiet street was the first thing I did. 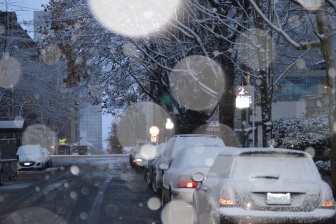 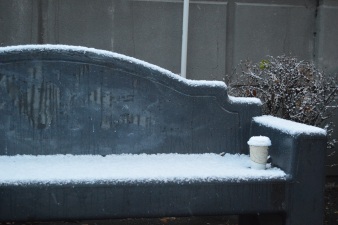 The snow was beautiful, as was the breathless quiet of our usually bustling city neighborhood, but returning home and thawing out my freezing hands was arguably the best part. Not only this, but the steaming mug of hot cocoa I made was the perfect start to a lazy winter day. 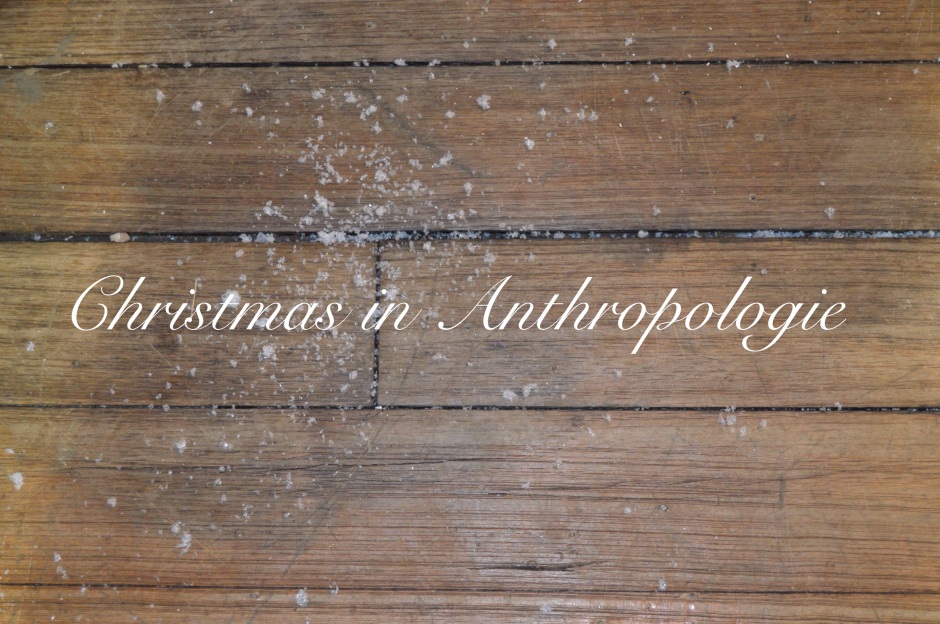 Christmas is rapidly approaching and christmas decor is everywhere.  One of my all time favorite stores is Anthropologie and I love the elaborate and creative seasonal decorations that they always set up.  Their decorations actually inspired me to start crafting, myself.  Last Friday night, my husband and I went out to spend a night in downtown to enjoy the Christmas decorations. We visited Anthropologie and I took some pictures of the decorations, such as the mugs, bowls, windows, and even their hardwood floors sprinkled with fake snow, and made a photo collage.  Just looking at the decorations in the store makes me so excited for Christmas! 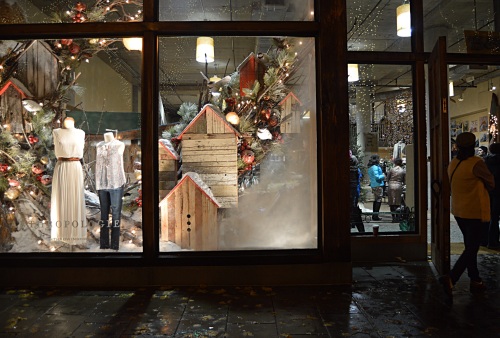 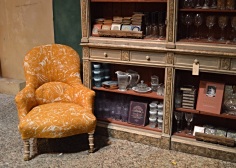 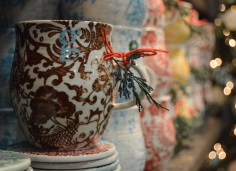 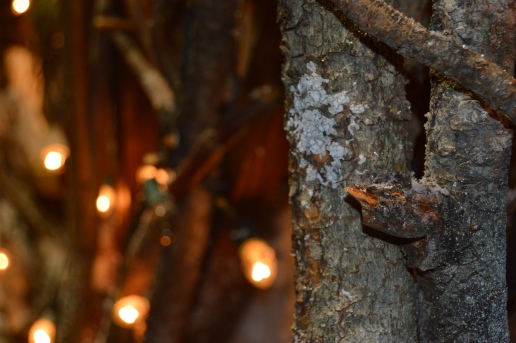 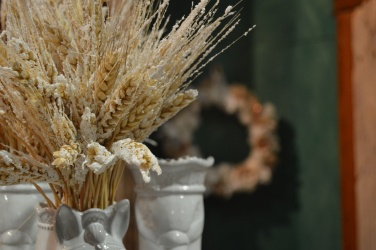 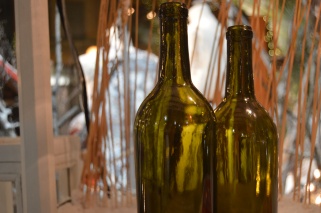 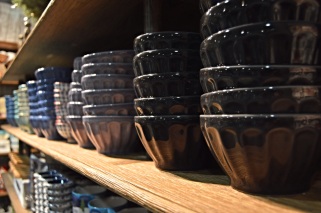 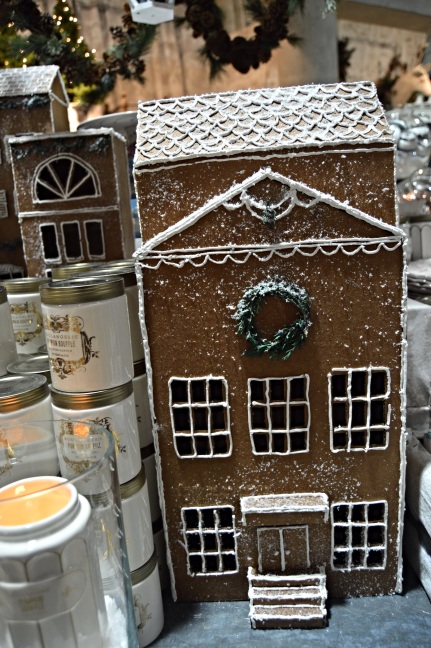 The winter wind is picking up outside my window, as the leaves fall from the trees, leaving them bare. The snow bunnies I needle felted in the summertime have finally woken up from a long, deep sleep in my studio.  This is Ella and she is sweet and kind, and she loves books.  After walking in the fresh snow every morning, she snuggles in a cozy place and dives into a good story.

This is Mila who loves to sing.  In the snow, little birds follow her, as they sing together.

Finally, this is Chloe.  She was in my first post of this blog, just saying hello.  She has jut gotten her new mittens and she loves to play outside in the snow all day long with the squirrels.

I like to think of all my needle felted creations as my little friends, so I decided to write this post in this way. I hope you enjoyed it!

When the colored leaves begin to fall, I know that the hand warmer season has begun.  Unlike structured gloves or mittens, the hand warmer allows for more flexibility.  Without taking them off, I can pay a cashier using my credit card or pick up the bills and coins from my wallet.  I can type on the laptop in my office until the heater works enough for me to feel warm.  I can wander through the book store looking for a book and flip through the pages.

I made this pair of simple design hand warmers with 100% Peruvian Highland Wool.  I also accented them with small crocheted flowers.  I love the color  of teal or ocean blue color of the yarn and I was instantly drawn to the yarn when I entered the store.

I made another pair of hand warmers of the same design, alternating a green and blue color. 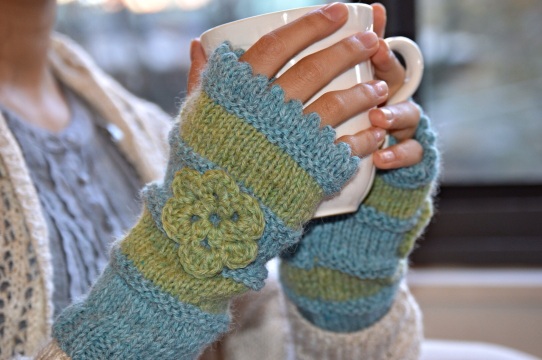 Of course, I also wear the hand warmers when I take Cocoa and Haru on walks. 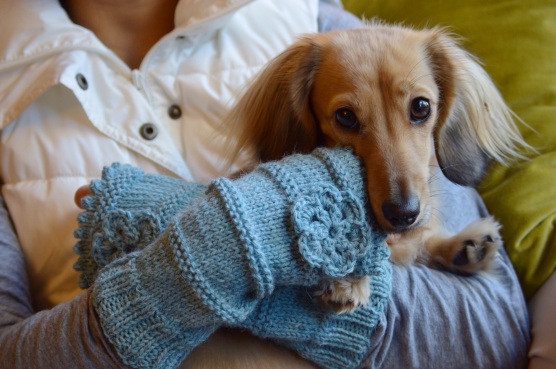 I love hand warmers, and for me, they are an essential for the wintertime. 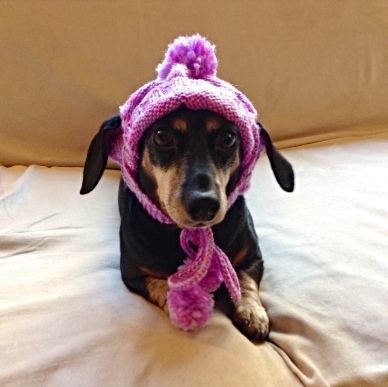 When my daughter was in elementary school, I used to knit her all kinds of scarves and sweaters to wear. As she grew older, my focus shifted to my two other babies; wiener dogs named Cocoa and Haru. Like many other dog owners, I constantly spoil them and spend precious time and money buying them toys and little outfits.

One day I saw an adorable picture in my kitchen calendar. 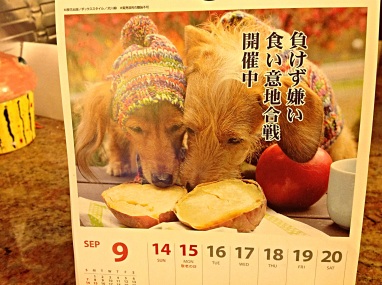 The rainbow colored knit hat inspired me to make a similar one for my cream colored, long haired pup, Haru. So I picked up my knitting needles and alpaca yarn that I hadn’t used since my last scarf. Simply eyeballing the picture and about a million mistakes later, I had completed a pretty, pink, mini hat.

Ecstatic with the outcome, I excitedly plopped the hat on Haru’s head, and tied the bow below her chin. Much to my disappointment, the hat made her head look like a mushroom, and she looked like a canine water polo player. A bit distressed, I turned to my other dog, Cocoa, who was lying dejectedly on his bed. Calling him out, I hopefully tied the hat to his head. It turned out that Cocoa looked much better in the hat than Haru did, and my hat making efforts were rewarded!